This blog will not bore you with huge equations about earthquake and seismic loads but will focus on some theoretical insights. And if you are a curious soul, then this is the right place as I will provide you with more references besides the information presented here.

They say “Earthquake itself never kills people but the structure which we have erected so proudly does”. Ever wondered what is an earthquake?- it is just a shaking of ground either horizontally or vertically. You may be familiar with inertia which every mass containing body possesses due to which objects tend to stay in rest or in motion. So when we apply force to them they will try to resist. Same thing happens with buildings during earthquakes. The ground starts to shake but top of building wants to stay wherever it is. This causes immense stress in members of structure (like beam, column, braces etc.). When a certain amount of stress exceeds in member they will collapse causing the whole building or structure to fail. So earthquake engineering is pretty risky business that's why they get paid so much.

A question may arise in your mind where these monster-quakes come from?- Earthquakes originate when immense energy releases suddenly in the interior or exterior of earth; those energies will travel in the form of vibrations to the earth surface.

They originate due to :

Earthquake waves are like ripples formed when you throw stone in water .They travel along the surface of earth. Farther you are away from the center of origin of earthquake lesser you will feel the shake. 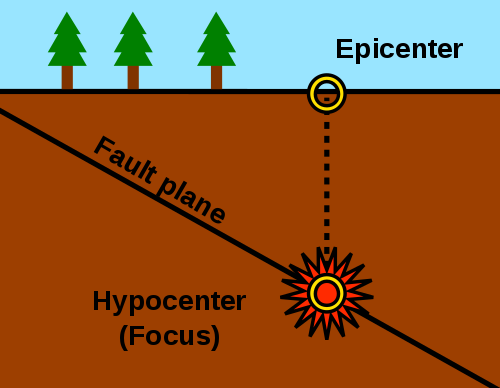 Richter scale was introduced in 1935 by Charles Richter. It measures magnitude of earthquake using seismograph and present it in a logarithmic scale. Increase in one scale denotes the earthquake magnitude being 10 times stronger. But there is some shortcomings of Richter scale that it cannot measure earthquake above 8 magnitude effectively. In modern day, scientists use Moment magnitude scale which works in a similar fashion with Richter scale but is more accurate and utilizes high processing capacity of computers and can measure earthquake of any scale effectively. When we see news about earthquakes the number they present are of the moment magnitude scale but they still call it Richter scale. There is another scale called the Modified Mercalli Scale which measures earthquakes based on how it was felt by human. This makes it easier to estimate destruction and effects in human life.

There are earthquake prone regions on earth like Japan, Himalaya region and California region. When you travel there you would probably feel small earthquake vibrations (Unfortunately you may feel large vibrations too ). Recently in april 2015 you may have heard news of an earthquake in Nepal which killed about 9,000 people and injured 22,000. (Yeah! Earthquakes are really dangerous). So, can anything be done to control these earthquakes?

Unfortunately, we cannot control the wrath of mother earth but what we can do is design earthquake resistant buildings and structures which in turn will reduce the casualties.

There are many standards for earthquake resistant structures and buildings around the world. Each country has their own standardized methods for calculations and factors based on the nature of earthquakes in their region. Many surveys have been done to develop these standards so that the engineers need not analyse and find out all the data time and again for designing.

Some standards for detail study of earthquake design consideration and calculations are as follows:

●        ASCE 7-16 Minimum design loads for building and other structures: Widely used in the USA and around the world.

We still can't answer questions like “How can we predict earthquakes?”, “What can be done to prevent it?”, but we can always be prepared for the worst to come.